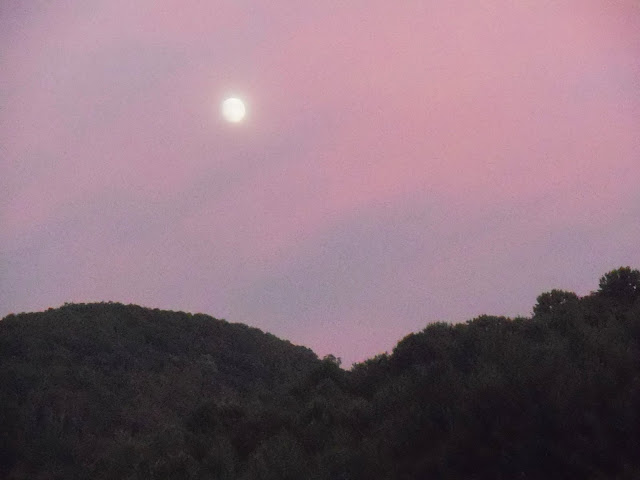 The cold came across the mountain. With it, came a breeze of sort, that whirled from the bottom of the tree filled hollow up and up to the dirt road where he paused. “I’m tired,” he thought. The wind whirled round his face.

He was dirty, dusty and rumpled all over. His coat, his father’s--was a few sizes too large, but quilted and warm enough. His windswept bangs stuck straight out of the navy cap perched on his head. His cheeks, pink and red from the cold, made him look comical. They were chapped. On his birthday last, this boy of just 13, set out to hike the Appalachian trail.

He had made the decision to leave the day after his birthday. He had formed the words in his mind's eye before he knew the extent of what it would take to live them out. These words had welled up within him: “I am not a captive. I am not a victim. Run.” Being shuttled from household to household was not for him. And so he took to the Appalachians. The big trees were his family now and the stream and the stars were his source. Many others before him had done the same.

Tonight, he had reached his destination. The sun was sinking fast over the mountain tops and it caused him to stop and gaze outward with the thoughtful large eyed stare of a young boy. The pine trees rustled loudly overhead. Sometimes, it seemed as if they would snap.

"The stand of pine trees would be perfect as any bed could be" he thought… "and private, too." As the last fiery streaks of the sun faded to gray, then blue-black, out of ritual he arose from the convenient stump and set up his modest nighttime camp. He noticed his body aching all over from the long day’s walk and the last hike up the patchy trail. His bed was made of folded up cardboard, with the outer long edge folded twice carefully to break the flow of cold night winds. The Appalachian mountains are known for whipping up the unexpected. This much he had come to know. Of the Appalachians it is said, "Just when you get used to the weather, it changes."

The boy’s hand grasped the only true ‘tool’ that he had on his person that had been his father’s. It was a rusty but sure flashlight, a Kel-lite 2D silver SKL that he had polished some and cleaned up, too. For his journey he’d made sure that he carried plenty of batteries for it, in case he got into trouble. Dad had always said, “Son, you never want to be caught without a flashlight. It could save your life."

He began the process of settling in for a sleep. His thoughts drifted back to a time when his mother was tending a fire. He could almost see his mother’s frame smack dab in the middle of the shadow of his mind’s eye. It was like a story. There were the shadows and then his mother’s hands, working. The soft line of her face was illuminated by the slightest of touches of firelight. "There she is!" he thought.

Then he would remember the good feeling he got while staring into the firelight as it jumped and changed color, from red to orange to white and back again. And there was the blue tinge that he liked better, fed by a wee bit of green if you looked in real close. He could see her hands moving, always working, in front of the flickering flames. Warmth crept over him. “Tick…tick…tick” went the story in his mind’s eye, frame by frame. This one he ‘played’ each night.

He sighed a heavy sigh as the shadows of night pressed in hard on the dark mountain. But when the pine trees parted in the wind, he could see the stars. “Click-click” went the flashlight, on and off, and on and off again. He wanted to leave the light on but knew he couldn’t dare drain the little bit of control that he felt he had over the immense darkness of the mountain.

His breathing began to slow. An owl hooted. The verse that accompanied him this and every night trickled up through his consciousness, parting his thoughts and soothing him altogether: “Light of Light, very God of very God, begotten, not made…” 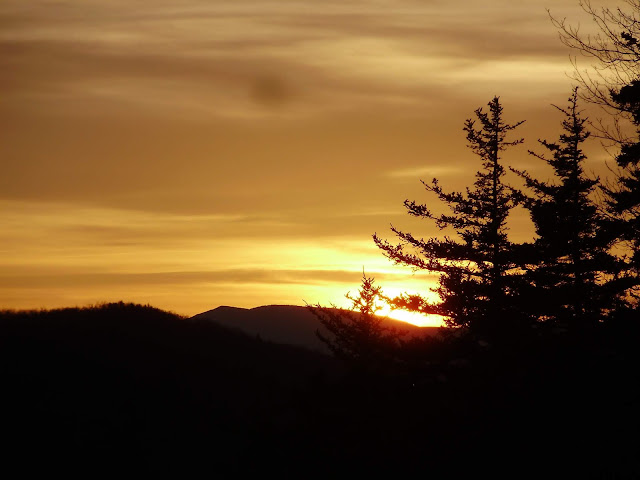 The above was written for a Poet's meeting in early December (2010) in the 'High Country' in the Appalachian Mountains of Boone, North Carolina.  We were asked to write on the theme of "Light." I wrote the above short story "The Light" and then remembered one of my all time favorite reads on the subject of "Light." Here it is for you (not to compare it to mine, pleeese :) but as a tribute.) I love this short story. Here is "The Little Match Girl" in English by Hans Christian Andersen. (All accompanying photos are mine.) 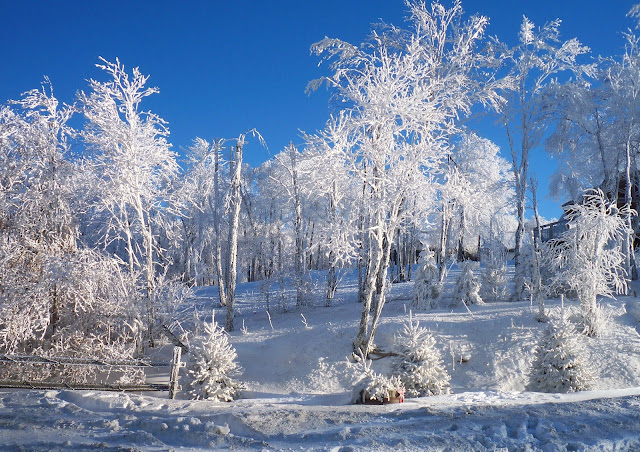 It was so terribly cold. Snow was falling, and it was almost dark. Evening came on, the last evening of the year. In the cold and gloom a poor little girl, bareheaded and barefoot, was walking through the streets. Of course when she had left her house she'd had slippers on, but what good had they been? They were very big slippers, way too big for her, for they belonged to her mother. The little girl had lost them running across the road, where two carriages had rattled by terribly fast. One slipper she'd not been able to find again, and a boy had run off with the other, saying he could use it very well as a cradle some day when he had children of his own. And so the little girl walked on her naked feet, which were quite red and blue with the cold. In an old apron she carried several packages of matches, and she held a box of them in her hand. No one had bought any from her all day long, and no one had given her a cent.

Shivering with cold and hunger, she crept along, a picture of misery, poor little girl! The snowflakes fell on her long fair hair, which hung in pretty curls over her neck. In all the windows lights were shining, and there was a wonderful smell of roast goose, for it was New Year's eve. Yes, she thought of that!

In a corner formed by two houses, one of which projected farther out into the street than the other, she sat down and drew up her little feet under her. She was getting colder and colder, but did not dare to go home, for she had sold no matches, nor earned a single cent, and her father would surely beat her. Besides, it was cold at home, for they had nothing over them but a roof through which the wind whistled even though the biggest cracks had been stuffed with straw and rags.

Her hands were almost dead with cold. Oh, how much one little match might warm her! If she could only take one from the box and rub it against the wall and warm her hands. She drew one out. R-r-ratch! How it sputtered and burned! It made a warm, bright flame, like a little candle, as she held her hands over it; but it gave a strange light! It really seemed to the little girl as if she were sitting before a great iron stove with shining brass knobs and a brass cover. How wonderfully the fire burned! How comfortable it was! The youngster stretched out her feet to warm them too; then the little flame went out, the stove vanished, and she had only the remains of the burnt match in her hand.

She struck another match against the wall. It burned brightly, and when the light fell upon the wall it became transparent like a thin veil, and she could see through it into a room. On the table a snow-white cloth was spread, and on it stood a shining dinner service. The roast goose steamed gloriously, stuffed with apples and prunes. And what was still better, the goose jumped down from the dish and waddled along the floor with a knife and fork in its breast, right over to the little girl. Then the match went out, and she could see only the thick, cold wall. She lighted another match. Then she was sitting under the most beautiful Christmas tree. It was much larger and much more beautiful than the one she had seen last Christmas through the glass door at the rich merchant's home. Thousands of candles burned on the green branches, and colored pictures like those in the printshops looked down at her. The little girl reached both her hands toward them. Then the match went out. But the Christmas lights mounted higher. She saw them now as bright stars in the sky. One of them fell down, forming a long line of fire.

"Now someone is dying," thought the little girl, for her old grandmother, the only person who had loved her, and who was now dead, had told her that when a star fell down a soul went up to God.

She rubbed another match against the wall. It became bright again, and in the glow the old grandmother stood clear and shining, kind and lovely.

"Grandmother!" cried the child. "Oh, take me with you! I know you will disappear when the match is burned out. You will vanish like the warm stove, the wonderful roast goose and the beautiful big Christmas tree!"

And she quickly struck the whole bundle of matches, for she wished to keep her grandmother with her. And the matches burned with such a glow that it became brighter than daylight. Grandmother had never been so grand and beautiful. She took the little girl in her arms, and both of them flew in brightness and joy above the earth, very, very high, and up there was neither cold, nor hunger, nor fear-they were with God.

But in the corner, leaning against the wall, sat the little girl with red cheeks and smiling mouth, frozen to death on the last evening of the old year. The New Year's sun rose upon a little pathetic figure. The child sat there, stiff and cold, holding the matches, of which one bundle was almost burned.

"She wanted to warm herself," the people said. No one imagined what beautiful things she had seen, and how happily she had gone with her old grandmother into the bright New Year. 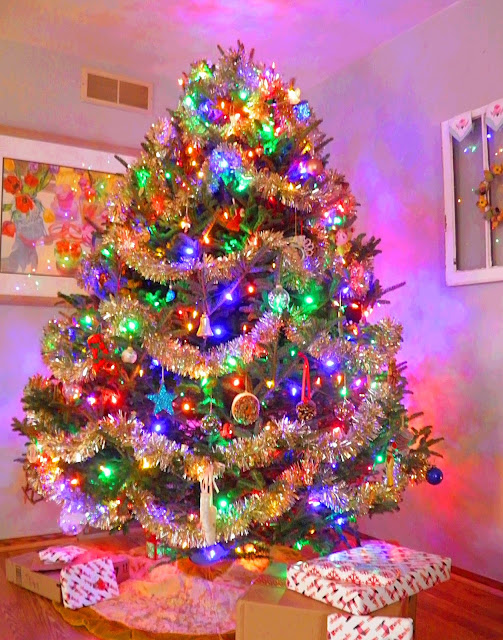 Blythe gets a new dress. 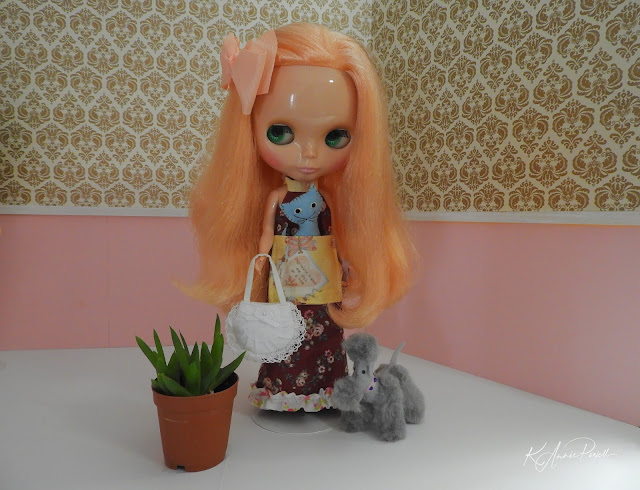 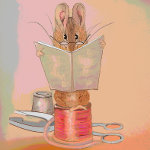 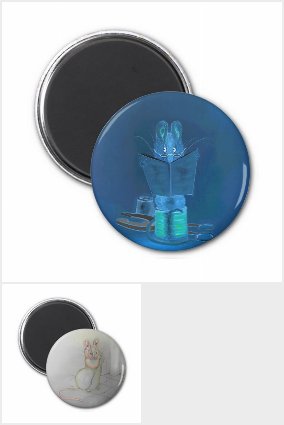