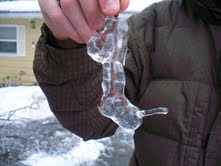 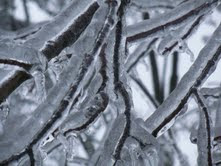 
I know~it's been a bit of awhile.

Let’s just say "I've covered a lot of ground" since my departure.

I left off making bread and then I managed to fall off the planet
(well, nearly.) And…I cannot stay on long.

On Christmas day we collectively did endeavor (ha!) :-)
to set a new record where I live… for the 'most trees that
snapped off' (in the ice.)

They are now calling what
happened here in the Appalachians
"The Ice Storm of the Century"
in which a state of emergency was officially
declared (for real.) These are some pics
from Christmas day itself, when we thought
the storm was fun.
It soon went from fun and entertaining
to mind-blowing and at times... mind numbing.