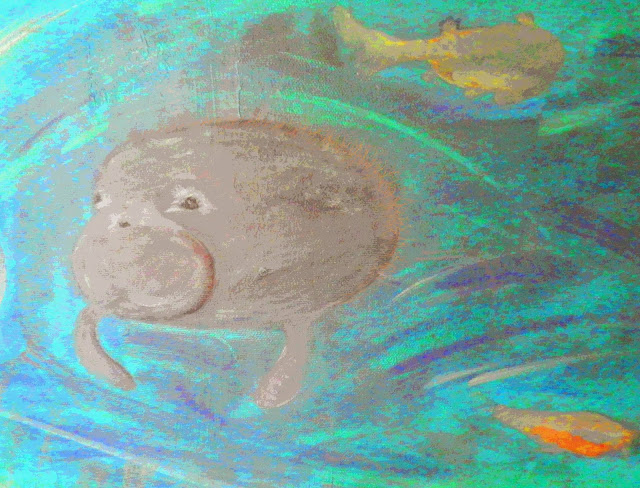 "Son of Big Red" (...a painting in acrylic by K. Annie Powell.)
"Big Red" himself has most likely passed on by now, some 15 years later.

The mammoth creature began to pass under the pontoon boat after surfacing on our side. Almost shaking, I hurry to put on the rest of my gear as I ready myself for the water. Plunging into the water near the back of the boat in the nick of time, I proceed to make my way forward toward the huge sea creature. Fighting against the current, to my amazement, I am able to come up behind the surely 15 (but feels like 20) foot beast! I slowly take in the huge girth of his massive paddle-like tail, noticing prop marks and some portions that are missing. I have found that this is a way to identify these creatures without mistake; by the (more often than not) man made marks on their tails and on their backs. This always makes me sad, of course, but I am glad to see how they have thrived in spite of the mark man makes.

“He must be about 15 feet long,” I think! I am frightfully careful not to disturb him as I slowly float and make my way further up along his very broad back and belly. His girth is huge! I am amazed to see that I cannot see around him from the top! This is an old creature--an ancient creature. All along his back I see prolific growing seaweed (or long flowing hair-like plants) up to three inches long or more moving to and fro in the water’s current. This carpet of plant life on his (her) back ranges in color from deep red to orange, and even a bit of yellow and bright lime green pop out here and there! His back was simply a wild mosaic of color!

I squeal in delight of discovery and pat his back as if to say “You are so old. I know you are old and I love you. You delight me!” I can sense that this valiant creature that has survived the likes of man and years of travel through currents of water. I squeal to him. He hears me, for the sound travels. As I carefully but deliberately pat his back but a few times, plumes of sand and dirt expand and then rise up and up. He is a great moving magic carpet made of algae and plant life. How old is he (she?) What a dream to come along the path of this remarkable sea creature and to (even) touch such a beast. It was like making the acquaintance of a huge well-aged under water elephant. It was like being in the presence of great wisdom. I was astonished. It becomes quiet in my soul as I marvel in the presence of this great creature.

The memory of this mammoth old man manatee sea creature that we bumped into in the Crystal River (most likely the oldest manatee there, I am assuming) stands out in my mind as the most wildly amazing moment in the cold crystal water that I could have had that day. The encounter still conjures up in my imagination many questions about the creature’s whereabouts, his age (was it a “she?”) and the like, even to this day! I have met many a manatee in the river, big manatees and small, gray colored ones, and even one pale white in color, but not a single one have I met that was even nearly as old and as super huge—as this magnificent creature. It was a dream I will remember for the rest of my life, to meet this particular manatee I have thus named “Big Red” or “Big Red Magic Carpet.”